Vaping among teens also increasing at an alarming rate.

(Washington, DC and Oakland, CA – October 29, 2019) – Adolescent suicides have spiked over the last decade and substance misuse including vaping is exacting a heavy toll on teens according to a report released today by Trust for America’s Health (TFAH) and Well Being Trust (WBT).

The report, Addressing a Crisis: Cross-Sector Strategies to Prevent Adolescent Substance Misuse and Suicide finds that, while progress has been made in reducing some risky behaviors, adolescent suicide and substance misuse rates remain high and in some cases are climbing. The report calls for the expansion of evidence-based and cross-sector strategies in order to save lives.

Suicide rates among 12- to 19-year-olds have increased 87 percent between 2007 and 2017 (when the most recent data is available) – making suicide the second leading cause of death among adolescents. In 2017, 7.4 percent of high schoolers nationwide attempted suicide within the preceding 12 months – a 17 percent increase from the previous year. Nearly 3,000 12- to 19-year-olds died by suicide in 2017.

“We know strategies that are proven to work and can improve mental health and well-being among our young people,” said Benjamin F. Miller, PsyD, chief strategy officer, WBT. “From Zero Suicide to Youth Mental Health First Aid to LifeSkills Training programs and dozens of other initiatives, there are solutions out there – why this is not the first question of every Presidential debate, prioritized in Congress, and in every state legislature is beyond me. Our country has failed to devote the time, energy, and resources to our youth.”

An additional area of concern threatening youth well-being is vaping—with rates of use among adolescents climbing dramatically. In just one year, 2017 to 2018, e-cigarette use by high school students increased by 78 percent and by 48 percent among middle school students. More teens are also reporting vaping marijuana.

While there is some good news – rates of illicit or injection and prescription drug use among adolescents have declined or held steady among 12- to 17-year-olds since 2002 – but those rates are still too high and cause serious harm and disruption to young lives. In 2017, 5,455 young people between the ages of 15 to 24 died due to a drug overdose.

Of additional concern are large disparities in substance misuse rates and suicide based on teens’ race, ethnicity, socioeconomic status, sexual orientation/gender identification or where they live.  Most striking is the high risk for substance misuse and suicide-related behaviors among gay, lesbian and bisexual adolescents.  Forty-eight percent of gay, lesbian and bisexual adolescents report considering or attempting suicide as compared to 13 percent of their heterosexual peers.  These high rates of suicide risk for sexual minority teens are likely due to stressors they experience including discrimination, bullying, violence and family rejection, according to the report.

American Indian/Alaskan Native teens experience the highest rates of suicide among any race and ethnicity in the United States: 16 suicides per 100,000 15- to 19-years-olds in 2016 – a rate 60 percent higher than the national average for all teens.  The high rates of substance misuse and suicide among American Indian/Alaskan Native teens are likely associated with the historical and intergenerational trauma experienced by their community as well as the lack of education and economic opportunities typically available to them.

Solutions do exist and need implementation

Adolescence is a critical juncture in teens’ lives. This report highlights the many opportunities to set youth on healthy pathways be increasing the life circumstances that protect them from harm.

The report highlights dozens of evidence-based programs in place in communities across the country that help reduce risk and build protective factors in teens’ lives  by strengthening families, providing counseling and mentorship, teaching social and emotional skills, fostering connectedness, particularly in schools, and working across sectors. Most importantly, addressing the factors that create or reduce risk for substance misuse or mental health issues will not only reduce negative impact on teens’ health, it will also improve outcomes in other sectors such as high school graduation rates or involvement with the juvenile justice system.

“Adolescence is a challenging time when the impact of poverty, discrimination, bullying and isolation can be intense,” said John Auerbach, President and CEO of Trust for America’s Health. ” Fortunately, there are policies and programs that can reduce some of these circumstances and the risks associated with them by strengthening teens’ coping and emotional skills – skills that can improve their health and lead to their succeeding in school.”

The report includes recommendations for policy actions at the federal, state and local level.

Among the specific recommendations are:

The report is part of the TFAH/WBT Pain in the Nation publication series, launched in 2017 and examining substance misuse and suicide trends and evidence-based policies and programs in an effort to promote a comprehensive approach to solving the nation’s deaths of despair crisis. The report series is designed to focus attention on the need for national resilience strategy.

Trust for America’s Health is a nonprofit, nonpartisan organization that promotes optimal health for every person and community and makes the prevention of illness and injury a national priority. Twitter: @healthyamerica1

Well Being Trust is a national foundation dedicated to advancing the mental, social, and spiritual health of the nation. Created to include participation from organizations across sectors and perspectives, Well Being Trust is committed to innovating and addressing the most critical mental health challenges facing America, and to transforming individual and community well-being. www.wellbeingtrust.org. Twitter: @WellBeingTrust. 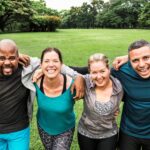