Having obesity is a risk factor for serious COVID consequences; pandemic could increase future levels of obesity due to increased food insecurity

(Washington, DC – September 17, 2020) – The U.S. adult obesity rate passed the 40 percent mark for the first time, standing at 42.4 percent, according to State of Obesity: Better Policies for a Healthier America released today by Trust for America’s Health (TFAH).  The national adult obesity rate has increased by 26 percent since 2008.

The report, based in part on newly released 2019 data from the Centers for Disease Control and Prevention’s Behavioral Risk Factors Surveillance System (BFRSS) and analysis by TFAH, provides an annual snapshot of rates of overweight and obesity nationwide including by age, race and state of residence.

“Solving the country’s obesity crisis will require addressing the conditions in people’s lives that lead to food insecurity and create obstacles to healthy food options and safe physical activity.  Those conditions include poverty, unemployment, segregated housing and racial discrimination,” said John Auerbach, President and CEO of Trust for America’s Health. “This year’s pandemic has shown that these conditions don’t only increase the risk of obesity and chronic illnesses, they also increase the risk of the most serious COVID outcomes.”

Childhood obesity also on the rise

The report includes recommendations on how best to address the obesity crisis grounded in two principles: 1) the need for a multi-sector, multi-disciplinary approach, and 2) a focus on those population groups that are disproportionately impacted by the obesity crisis.

Trust for America’s Health is a nonprofit, nonpartisan organization that promotes optimal health for every person and community and makes the prevention of illness and injury a national priority. 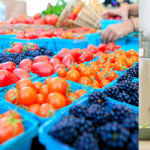 report - Sep 2020 The State of Obesity 2020: Better Policies for a Healthier America