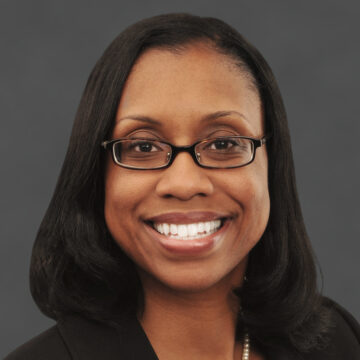 Dr. J. Nadine Gracia is Executive Vice President and Chief Operating Officer at TFAH, where she works in partnership with the president and CEO to develop and implement strategic policy priorities, and manages TFAH’s core business functions and internal operations. She has extensive leadership and management experience in federal government, professional associations, academia, and clinical practice. Prior to joining TFAH, Dr. Gracia served in the Obama Administration as the Deputy Assistant Secretary for Minority Health at the U.S. Department of Health and Human Services (HHS). In that capacity, she directed departmental policies and programs to end health disparities and advance health equity, and provided executive leadership on administration priorities including health reform and criminal justice reform.  She also led the federal Office of Minority Health, where she oversaw a budget of $57 million and pioneered innovative, multi-sectoral partnerships in the public and private sectors. Previously, she served as Chief Medical Officer in the Office of the Assistant Secretary for Health, where her portfolio included adolescent health, emergency and disaster preparedness, environmental health and climate change, and global health. Prior to that role, she was appointed as a White House Fellow at HHS and worked in the Office of the First Lady on the development of the Let’s Move! initiative to solve childhood obesity.

A first-generation Haitian-American, Dr. Gracia received a Bachelor of Arts in French with honors from Stanford University, a medical degree from the University of Pittsburgh School of Medicine, and a Master of Science in Clinical Epidemiology from the University of Pennsylvania. She completed her training as a pediatrician at Children’s Hospital of Pittsburgh and later was a clinical instructor and research fellow at The Children’s Hospital of Philadelphia, where she conducted research on community risk factors for violence. Dr. Gracia is active in many civic and professional organizations.