In 2017, more than 152,000 Americans died from alcohol- and drug-induced fatalities and suicide. That’s the highest number ever recorded and more than twice as many as in 1999. The largest number of these deaths, almost half, were the result of drug overdoses—more than the peak annual total from HIV, guns, or car crashes. Trust for America’s Health and Well Being Trust have called for immediate and sustained attention and investment in a National Resilience Strategy to address this rising death toll.

Increases in alcohol, drug, and suicide deaths have affected all age groups and all communities, but the impact on people in their 20s and early 30s has been especially pronounced. In particular, the number of drug deaths among young adults has increased by 400 percent during the last two decades, in large part fueled by the opioid crisis. Drug deaths accounted for nearly seven deaths per 100,000 people nationally across all age groups in 1999. By 2017, that number increased to 22.7 deaths per 100,000 across all age groups. For young adults ages 18 to 34 in 2017, there were nearly 31 drug-overdose deaths per 100,000 people. Alcohol death rates for young adults ages 18 to 34 went up 69 percent between 2007 and 2017, and suicide deaths for the same age group and same years went up 35 percent.

Research suggests that the United States urgently needs evidence-based policies and programs, including those that are community- or population-specific, to help stem the national tidal wave of deaths of despair. This issue brief is a continuation of Trust for America’s Health (TFAH) and Well Being Trust’s Pain in the Nation series. It focuses on young adults, ages 20 to 34, often called Millennials. The Pain in the Nation series helps inform and create a comprehensive National Resilience Strategy.

Millennials are generally thought of as people born between 1981 and 1996, making them ages 23 to 38 in 2019. Millennials faced and continue to face a mix of challenges unique to their generation, many of which are discussed in this report, including the opioid crisis, the skyrocketing costs of education and housing, and entering the job market during the great recession.

Often there are differences in age ranges or age groupings in data sets about Millennials. For this reason, multiple data sets, with varying age ranges, were used for this report. For example, data sets covering those 18-25 or 25-34 or 30-35 are included, but the main theme is consistent: alcohol, drugs, and suicide are having a profoundly negative impact on many young adults and their families.

A look at the data tells the story

Since the late 1990s, deaths from alcohol and drug misuse and suicide have been steadily on the rise for all age groups, including the Millennials. 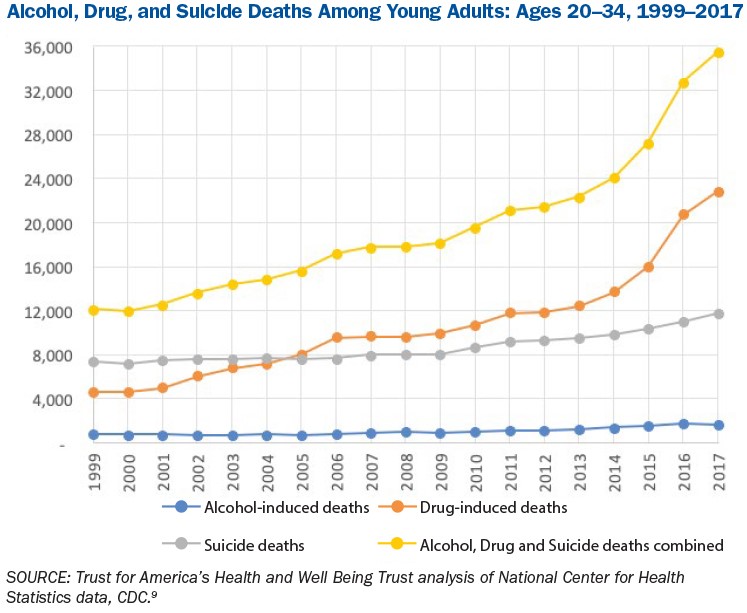 Within a one-year period (2016–2017), double- and triple-digit percent increases in synthetic opioid deaths occurred for both sexes, all races and ethnicities, and in all regions of the country. 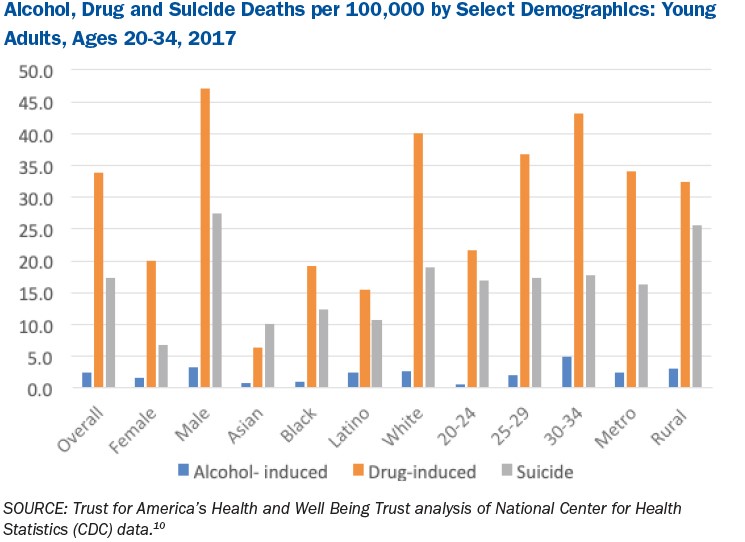 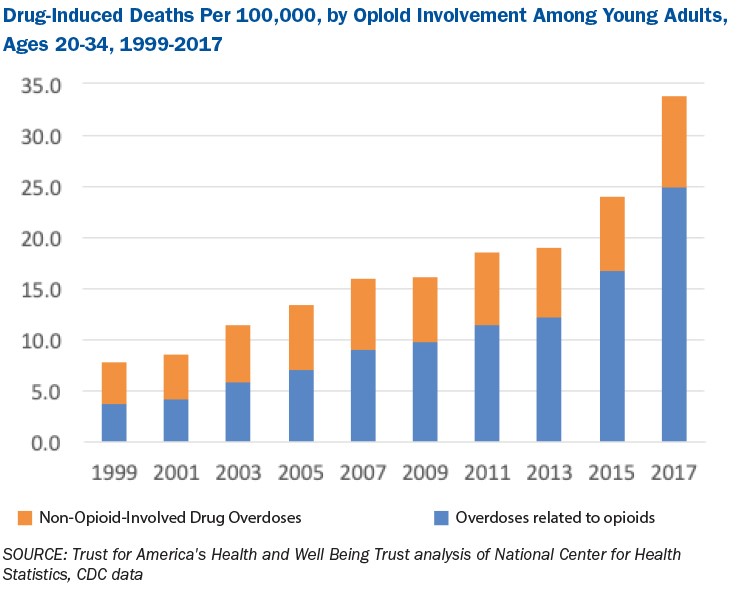 Suicide rates are up

Young adults experienced larger proportional increases in suicide deaths when compared with other age groups, except, alarmingly, children and adolescents. Between 2016 and 2017, suicide rates increased by 4 percent across all age categories, the largest annual increase since at least 1999, when the dataset begins.

Over the past decade, suicide increased in nearly every state, but there were substantial variations by demographic group. For 18- to 34-year-olds, there was a 25 percent increase in suicide deaths over the past decade.

Between 2000 and 2016, the most common means of suicide for men were firearms. A 2017 Pew Research Center survey found that 43 percent of 18- to 29-year-olds either personally owned a firearm or lived with someone who did. For women, the most common method was poisoning or overdose.

According to a 2018 review of the National Survey of Drug Use and Health, serious psychological distress during the last month and suicide-related outcomes (including suicide ideation, plan, attempts, and deaths) are increasing sharply. Between 2008 and 2017, that distress increased by 71 percent among young adults ages 18 to 25. The survey found less consistent and weaker increases among adults ages 26 and over.

Why focus on the Millennial generation?

Millennials comprise more than one-third of the nation’s workforce and they are the largest portion of Americans serving in the military. They continue to face a mix of challenges unique to their generation including the opioid crisis, beginning and growing their careers during the great recession and the high costs of education and housing.

Of households headed by someone younger than 35, 40 percent have outstanding student-loan debt. Young people with college debt typically spend close to half of their income on loan payments. Financial stress is a known risk factor for suicide.

The cost of healthcare is an additional stressor for most Americans, including young adults, and can cause people not to seek care in a timely manner. Approximately one-quarter of Millennials do not have health insurance.

Many Millennials lack forms of social capital that have historically assisted young generations, such as the sense of community offered in a place of worship. Compared with their grandparents’ generation, Millennials are less likely to be connected to major societal institutions such as political parties or religion.

Another critical element of the report’s focus on Millennials is the fact that many are parents of young children; if they misuse alcohol or drugs or have poor mental health those behaviors are likely to have serious impacts on multiple generations of their family.

Young adults are dying due to substance use disorders and suicide at alarmingly high rates. We must find solutions that meet their needs.

What needs to be done?

The report focuses on five issue areas that must be considered in any efforts to stem the tide of deaths of despair among young adults. They are:

New and specific interventions aimed at reducing these deaths of despair amongst young adults are critically needed, including these 10: