Obesity is a growing epidemic in the United States – and has been for decades. Currently, about one in three Americans of all ages – or more than 100 million people – have obesity.

This report based in part on newly released data from the Centers for Disease Control and Prevention’s Behavioral Risk Factor Surveillance System (BRFSS), and analysis by TFAH, provides an annual snapshot of obesity rates nationwide.

Obesity has serious health consequences including increased risk for type 2 diabetes, high blood pressure, stroke and many types of cancers. Obesity is estimated to increase national healthcare spending by $149 billion annually (about half of which is paid for by Medicare and Medicaid) and being overweight or obese is the most common reason young adults are ineligible for military service.

Nine U.S. states had adult obesity rates at or above 35 percent in 2018, up from seven states at that level in 2017, an historic level of obesity in the U.S. The nine are: Alabama, Arkansas, Iowa, Kentucky, Louisiana, Mississippi, Missouri, North Dakota and West Virginia.

Obesity rates vary considerably between states with Mississippi and West Virginia having the highest level of adult obesity in the nation at 39.5 percent and Colorado having the lowest rate at 23.0 percent. 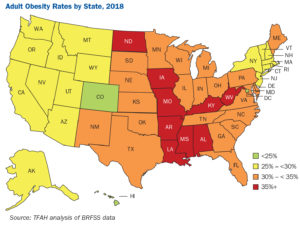 A second data source referenced in the report, the National Health and Nutrition Examination Survey (NHANES) also shows unprecedented levels of obesity in the U.S. In 2015-2016, the most recent available data, the national adult obesity rate was 39.6 percent and the national child obesity rate was 18.5 percent. Strikingly, the incidence of obesity in the U.S. has increased by 70 percent over the last 30 years for adults and by 85 percent over the same time period for children.

“These latest data shout that our national obesity crisis is getting worse,” said John Auerbach, President and CEO of Trust for America’s Health. “They tell us that almost 50 years into the upward curve of obesity rates we haven’t yet found the right mix of programs to stop the epidemic. Isolated programs and calls for life-style changes aren’t enough. Instead, our report highlights the fundamental changes that are needed in the social and economic conditions that make it challenging for people to eat healthy foods and get sufficient exercise.”

The report highlights that obesity levels are closely tied to social and economic conditions and that individuals with lower incomes are more at risk. People of color, who are more likely to live in neighborhoods with few options for healthy foods and physical activity, and, are the target of widespread marketing of unhealthy foods, are also at elevated risk.

While the obesity rates are alarming, there are new data offering the promise of policies that combat the epidemic, namely promoting healthier food for children through revamped WIC food packages and fostering behavior change through taxes on sugary drinks.

The report includes 31 recommendations for policy action by federal, state and local government, across several sectors, designed to improve access to nutritious foods and provide safe opportunities for physical activity, while minimizing harmful marketing and advertising tactics. All of the report’s recommendations are grounded in two key principles: the complexity of the obesity crisis requires multi-sector solutions and a systems approach, and, interventions should focus on communities with the highest levels of obesity first as a matter of health equity and because such interventions offer the best opportunity to impact the problem.

Among the report’s recommendations for policies to address the obesity crisis are: