On September 30, the Centers for Disease Control and Prevention (CDC) released a new report on provisional data on suicide mortality in 2021. The new data shows a 4 percent increase in the national suicide rate—rising from 13.5 deaths per 100,000 population in 2020 to 14.0 deaths per 100,000 population in 2021. In contrast, the national suicide rate declined in both 2019 and 2020, though it had steadily increased over the previous two decades. 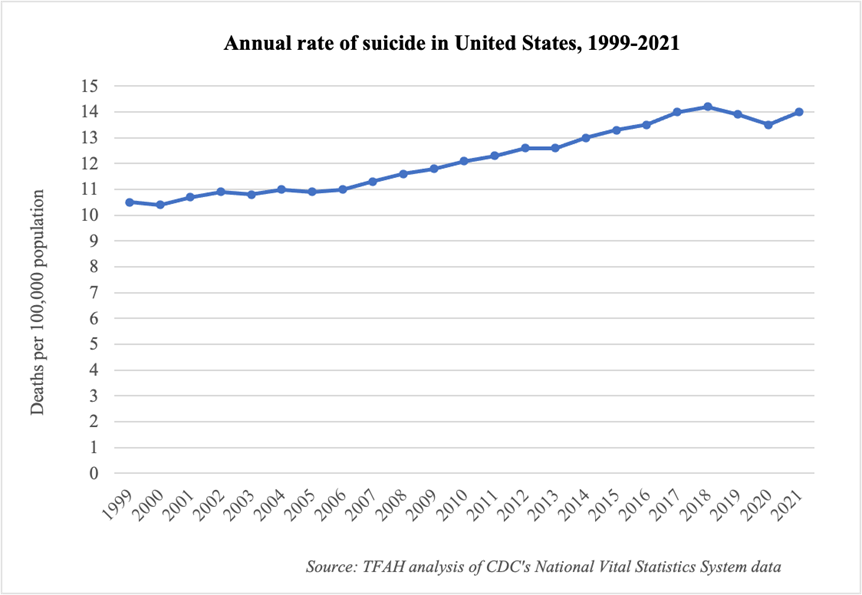 The report does not include racial/ethnic or geographic information, nor information on suicide method—all critical pieces to understanding the full picture. For example, data from 2020 showed higher rates of  suicide among American Indian, Black, and Latino people and of suicide by firearm—all in a year when the overall suicide rate declined. The National Center for Health Statistics will likely release final 2021 mortality data, including these additional data points, in December.

“The increase in suicide is devastating,” said J. Nadine Gracia, M.D., MSCE, President and CEO of Trust for America’s Health (TFAH). “The new data underscores the need for more attention on this issue and action to prevent future suicides—by federal policymakers, the private and non-profit sectors, and every community across the nation. This study is a wakeup call that we continue to face a mental health and substance use crisis, but we can prevent these tragic deaths.”

The most recent Pain in the Nation report from TFAH includes 2020 data and an analysis of longer-term trends, as well as policy recommendations for reducing alcohol, drug, and suicide deaths. The new CDC report reaffirms the importance of many of these recommendations, including to: