Salt Lake City has a reputation as a city whose residents are physically active. Many people there hike, bike, ski, walk, and run in the hills, canyons, and mountains surrounding the city.

Even so, the Salt Lake City area has not escaped the obesity epidemic that has swept the country over the past few decades. Almost a quarter of all residents are obese.

One reason for this contradictory mix of fit and fat is the area’s physical environment. It offers ample outdoor recreation options, it has a robust mass transit system, and several neighborhoods that encourage people to walk and bike.

At the same time, it also includes a good number of sprawling, disconnected suburbs that make it difficult for residents to be active.

Many American cities face similar issues. But in Salt Lake City the contrast between the two kinds of environments — those that encourage physical activity, and those that discourage it — is particularly striking.

Overall, the Salt Lake area has several features that increase opportunities for everyday walking. The region has a growing transit system that includes commuter rail, light rail, and buses. More than 143,000 trips are taken on the system each day.

That number will soon grow. The Utah Transit Authority (UTA), the state agency in charge of rail transportation, is now in the middle of a $2.6 billion project that will add four more light rail lines and another commuter line, more than doubling the current 64 miles of track.

In addition, Salt Lake City will soon begin building a $55 million streetcar line, that will extend over two miles through the downtown Sugar House neighborhood. The project has received significant support from Salt Lake City Mayor Ralph Becker, who sees it as a cornerstone of downtown revitalization. The city is working on plans for two additional streetcar lines.

A former city planner who rides his bike to work nearly every day, Becker has played a major role supporting policies that encourage physical activity.

Under Becker, Salt Lake City has increased its budget for bicycling from $50,000 to $500,000, and hired a bicycle coordinator. The city now has 170 miles of bike lanes, 47 miles of bike trails, and 26 miles of walking trails. This

year it will add another 65 miles of bike lanes. “We are taking a comprehensive approach,” said Becker. “We want to increase biking, walking, and transit service. We’ve got a long way to go, but we’re making good progress.”

Last year, the mayor initiated a review of all city ordinances to identify those that impede active living. So far, officials have identified more than 300 that they hope to change, including laws that discourage urban agriculture, and mixed use zoning. Blending retail and residential use can help increase walking and biking; when stores are close to homes, people don’t have to drive to go shopping.

The city also boasts several areas specifically designed to encourage physical activity. Gateway, a decade-old development west of downtown, features apartments built above a range of stores, as well as a nearby supermarket.

In recent decades, another neighborhood near downtown, The Avenues, has been revitalized. Built more than a century ago, the area has small lots, gridded street design and sidewalks— all of which make walking easier. And next spring, a new development will open, also downtown: City Creek will encompass 20 acres, and will include condominiums, department stores, and a 50,000-square-foot supermarket. Funded by the Mormon Church, it will cost $1.6 billion. Fifteen miles south of the city, another community is also emphasizing active living. Daybreak, a planned suburb, opened in 2005 and will eventually encompass 4,000 acres. Building will continue for another two decades; eventually Daybreak will include more than 162,000 houses.

Planners specifically overseeing the development specifically designed Daybreak so that residents can easily walk or bike. Houses are close together, and residential areas are close to shopping areas and schools. Streets are narrow and include sidewalks, which makes it easier to cross and slows vehicle speed. All houses will be a short walk to a park, and the development will eventually have nearly 40 miles of trails. In addition, Daybreak is linked by light rail to downtown Salt Lake City.

“It’s a more compact community, and that seems to produce more walking,” says University of Utah professor Barbara Brown, who studies the link between obesity and neighborhood layout. “It’s a nice example of how a city can be designed to produce more walkability.”

She and her colleagues found that children in Daybreak are much more likely to walk to school than kids in a more typical suburban community nearby. According to their research, more than 80 percent of Daybreak students walked to school at least some of the time, compared with about 20 percent in the other neighborhood.

“Judging from this, kids in Daybreak get significantly more physical activity from walking to school than kids in surrounding communities,” Brown said.

In another study, Brown looked at how the layout of different Salt Lake area neighborhoods affected the weight of residents. She rated the levels of sprawl in various neighborhoods throughout the area; among other measures, she looked at the density of homes; the mixture of homes and retail businesses; number of streets with sidewalks and crosswalks; the number of stores with ground-floor windows (makes being on foot more appealing); residents’ sense of safety from crime and traffic problems; and the degree to which a neighborhood had a central area that residents could reach by walking or biking.

According to her calculations, many Salt Lake area communities had high levels of sprawl. Among the most spread-out were large suburbs south of the city, such as Draper, Sandy, South Jordan, and Herriman.

These communities were part of the sweeping national trend that started in the 1940s and continues with the McMansions of today: “After World War II, the whole development business changed,” says Reid Ewing, a professor of planning at the University of Utah who studies environment and obesity. “Spreading out became much more important.”

Brown found that people who live in more compact, and hence more walkable, neighborhoods tended to weigh significantly less than those who lived in more sprawling neighborhoods. On average, a typical six-foot-tall male in a sprawling area weighs ten pounds more.

Overall, Ewing says, the Salt Lake area epitomizes what’s happening all over the country. As cities and counties begin to engineer and re-engineer communities to promote movement and exercise, they must also deal with the legacy of older areas that in many ways hinder activity. 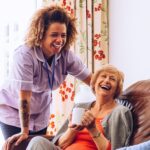